The multiple powers of the Magic Wand Original 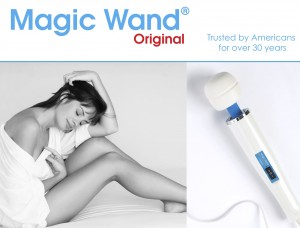 It’s all in the design

The Magic Wand Original is a hand-held device that is 12 inches long (or 30 cm) and is powered by a power cord connected to the mains. It is the device’s rubber head that delivers the massage action – it’s a 2.5 inch ball of rubber that is attached to the Want with a flexible neck. There are two speed settings available in the Magic Wand Original – 5,000 rpm or 6,000 rpm.

The television series “Sex and the City” was a huge cultural phenomenon around the world. The four characters helped to define trends and showcase a modern lifestyle that became aspirational for many women. Products that were featured on the show quickly became best-sellers and must-have items. It was in 2002 in the fifth season of Sex and the City that the Magic Wand Original made an appearance. In the episode titled “Critical Condition”, Samantha Jones enters a store wanting to buy a vibrator and gets into an argument with the store clerks who insist that the models that she is considering are only designed as neck massagers. An expert on female pleasure, Samantha Jones got exactly what she wanted and as a result the Magic Wand Original saw a huge surge in sales, with many stores reporting that they had sold out of all stock soon after the episode had aired.

It is actually a neck massager